Our first few days in Amsterdam were sunny and warm.  By Tuesday, the day we left, the skies had become overcast and the weather a bit cooler.  After our final breakfast of coffee and croissant, we caught the ICE train at Amsterdam Centraal and began our journey  across the Netherlands and into Germany.  (Have we mentioned that we wish we could do trains in the US like they do trains in Europe?  A person can get almost anywhere from almost anywhere by train.  The trains are (mostly) reliable, comfortable and speedy.)  We passed fields, farms, villages and rivers until finally crossing the Rhine river into the city of Cologne, our next stop along our trip.

Cologne’s history dates back to Roman times when it was founded in 50 AD as “Colonia Claudia Ara Aggrippinensium.”  Located at the crossroads of several major trading routes, it remained an important city throughout the middle ages and into modern times.  We arrived by early afternoon and, immediately on stepping out of the train station, were presented with the stunning view of Cologne Cathedral in all it’s immense, gothic glory.  With construction dating back to 1248, it is now the tallest gothic church in northern Europe. A UNESCO World Heritage site,  it sees over 20,000 visitors a day.   The Cathedral was one of the few structures to remain standing after the Allies destroyed most of the city in aerial bombing during WWII.  The image of the Cathedral standing tall amidst the post war rubble, in spite of having been hit several times, was a source of strength and inspiration for a devastated population. 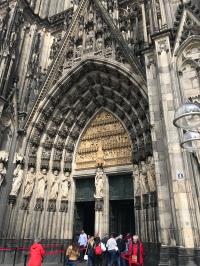 Cologne was grey and rainy that particular day, but we made the most of it.  The first order of business was lunch and we found the Brauerei Z Malzmeuhle, one of many Brauhauses, or traditional pubs in Cologne brewing their own Kölsch for which the area is famous.  The restaurant was busy so we were seated with an older German couple. They spoke no English and we spoke no German, but we nodded and smiled while we ate our polish sausage and bratwurst accompanied by mounds of pickled cabbage and roasted potatoes.  The beer was served in small glasses that were refilled multiple times, each time with a check mark added to our coaster which the proprieter simply counted up when it came time for the bill.

After a stroll through the Alter Markt (Old Market), an open air market with outdoor cafés, ice cream shops and Brauhauses, we began exploring a bit more of the city’s history.  The Roman origins of this town are ancient now, but still very much present,   with pieces of gates, sewers, roads and walls emerging between the modern roads and buildings.  They’ve done a nice job of restoring and displaying these remnants of the past, many of which can be found in the area immediately around the Cathedral.   Just to the south side of the Cathedral, a 3rd century Roman villa was discovered in 1941 during construction of an air raid shelter.  To preserve the find, it was left in place and around it was constructed the beautiful Roman-Germanic Museum which houses the villa, its wonderful mosaic, and a host of pre-historic, Roman and early German artifacts.

Strolling through the Market 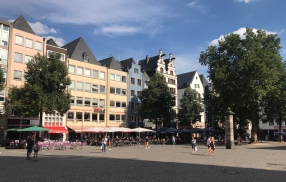 The Roman Past Encountered on our Walk 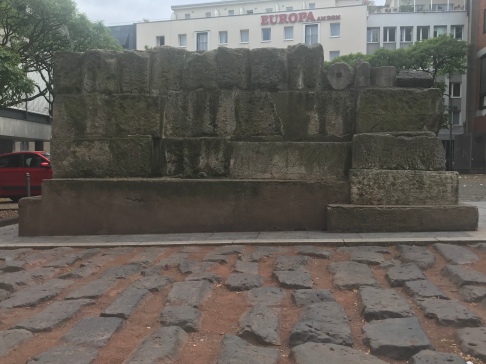 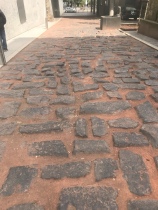 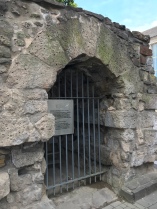 After going through the museum we strolled over to Cologne’s City Hall, under which the foundations of the Praetorium (Governor’s Palace) were found and excavated.  In use between the 1st and 4th Centuries, it was considered the most important Roman palace on the Rhine.  The excavations have been quite detailed and include, not only some of the main rooms of the palace itself, but also an opportunity to explore some of the original Roman sewers.  It was closed by the time we got there so we didn’t get to go inside and explore, but we did get to see some of the restoration work being done outside. 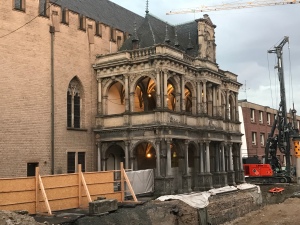 Still full from our lunch we ate a light meal at the Funkhaus, a local wine bar and then headed to our hotel in anticipation of an early train to continue our journey south along the Rine.  In an afternoon we only scratched the surface of all there is to see and do in Cologne.  It was only intended as a stopping point, but clearly a longer stay on another trip will be in order.

4 thoughts on “An Afternoon in Cologne”